Cricket Star of the Season 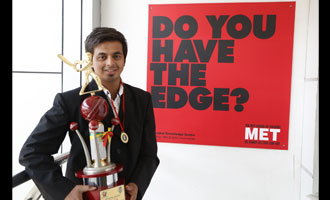 In a country where cricket is not just a game but a religion, Bhavik Joshi chose to be a part of this game since he believes in the adage that winning or losing is a part of the game but then who doesn’t like winning? This aspiring Sports Journalist studying in M11 batch of IMM has recently won the Best Batsman award at the recently concluded Chedda Nagar Cricket Tournament.