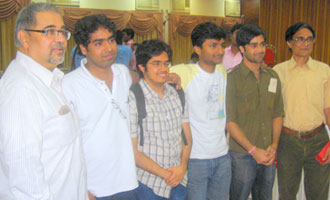 The MET IMM students used their talented skill and shone at the Sixteen:nine International Film Festival which was organized by the students of SVKM's UPG College of Management, India on 12th and 13th of January, 2009. The vision was to promote student filmmakers on a global level. This film festival was different from other film festival not only in terms of being a platform for showcasing talent but also as a learning experience for filmmakers.