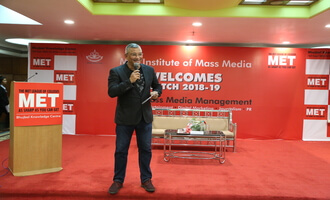 MET Institute of Mass Media gave a warm welcome to the 2018 - 19 batch of PG students that has chosen to make a career in the fields of Advertising, Entertainment, Digital Marketing, Journalism and Public Relations. The insightful two day induction program witnessed a galaxy of senior industry professionals who mentored the students across media professions. The inauguration ceremony was graced by Mr. Subhash Kamath, CEO and Managing Partner – BBH India. He discussed the media convergence approach conceptually and gave the young aspirants THE KEY MANTRA – ‘It’s the ideas that will work, learn to tell great stories’.

Day 2 of the Induction witnessed the film team of the educational film ‘Rough Book’. Artist Neil Gagdani and Amaan Khan shared their experiences acting in the film while Actor, Producer & Director, Mr. Viveck Vaswani explained how the thought of making a film on the concept originated. This session was followed by a ‘Peep in to the Digital Era’ by the leading Digital Consultant Mr. Aditya Mehta. The induction concluded with an alumni interaction from Mr. Shrenik Gandhi, Founder and Anish Raul, Manager - Content & Strategy of White Rivers Digital. The shared how they took their baby steps into the profession while studying at MET itself and the steady steps lead them to have success stories of award winning campaigns. The induction program as it is aimed to, gave the students a perfect perspective to start taking their baby steps into the media world.