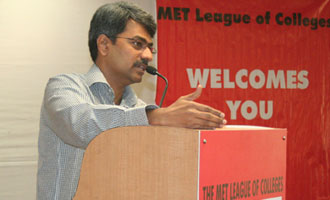 Mr. Jay Deshmukh, Deputy Chief Bureau, Agence France-Presse (AFP) - a French news agency, the oldest one in the world visited MET League of Colleges for a newsworthy interactive session on ‘Journalism in War’ at MET Convention Centre on January 21, 2009. Since 2003 to 2008 he was in Iraq covering stories on Iraq and US war.