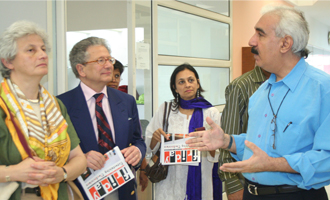 Mr. Dominique Moisi, Special Advisor to the French Institute of International Relations along with his wife visited MET League of Colleges on 10th March, 2010. Mr. Moisi is one of the foremost experts on International Relations and Geopolitics as well as Middle East Affairs. Mr. Moisi is the Advisor to IFRI - the most prestigious think - tank of France, and was instrumental in setting up the organisation in the late 1970s, along with Thierry de Montbrial. He is a visiting Professor at Harvard University and the author of The Geopolitics of Emotion. He regularly contributes articles to The Financial Times, New York Times and other reputed French dailies

In his interaction with the members of the faculty from the MET Institute of Management, Mr. Moisi shared his views on the Indo-Pak relations as also on the role of India, China and Russia in resolving some of the current issues being faced at the international level. Mr. Moisi also shed light on his book and the issues that it touches upon.

Moreover, Mr. Miosi and his wife visited the various Institutes at MET and visited the library and MET World of Music (MWM). At MWM, Mr. Moisi and his wife commended the visionaries of MET for having made various facilities like MWM, the Recreation Centre and other infrastructural requirements available to the students to facilitate their overall development